Stock Market Wire reported on Tuesday that Aureus Mining, a publicly traded company on the London and Canadian exchanges, conveyed “encouraging” results from “reconnaissance exploration” of natural resources in Liberia. The company expects to expand its efforts in the country.

This is good news for Liberia. Really.

While it is true that foreign companies win concessions to extracting resources from African countries hurt the continent’s economies, Liberian President Ellen Johnson Sirleaf has taken steps to ensure that is no longer the case in hers. The entrepreneurial-minded president has reviewed and renegotiated Liberian contracts with foreign companies eager to tap into Liberia’s mineral wealth, particularly iron ore, gold, and petroleum. The renegotiated contracts require foreign companies to focus on increasing local purchasing as well as social issues such as improving housing, education and increasing jobs.

Jobs, the International Monetary Fund (IMF) noted late last year, rather than concessions are what Liberia needs to focus on if the country wants to see growth. That’s an important point. The riches that natural resources bring to a country’s coffers conjure the illusion of productivity and development.

“Without vibrant small and medium sized businesses and with all hopes tied to big concessions,” AllAfrica.com recently wrote, “it remains to be seen how the problem of resilient growth and job creation can be tackled. The private sector cannot solely come from without. It has to be developed from within to attract those from without.”

It is a point that foreign companies agree with. Chevron, BHP Billiton, and ArcelorMittal are all companies eager to work to unleash Liberia’s entrepreneurial potential. Last month, in opening up an office in Monrovia, Chevron noted that it was aligned with the government’s strategy of “lifting” Liberia up. The California-based energy company has initiated 13 projects “directed primarily towards the much needed rehabilitation of infrastructure and the provision of equipment.” Those projects include funding two community radio stations and upgrading facilities at three women’s markets.

That Chevron is focused on Liberia’s marketplace is no surprise. Ensuring the vitality of the country’s small and medium sized businesses is key to Chevron’s success. It’s the key, frankly, to any foreign company’s success. It is a realization many have come to after years of not-so-successful business approaches in the developing world.

For decades, many foreign companies saw places like Liberia only through the resource riches of minerals. All quickly learned that those riches led only to short-term gain that quickly evaporated. True investment would come only when they engaged Liberians as partners that collaborate on skills sharing and transfer. 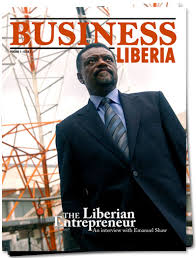 And there is tremendous skill in Liberia. My friend and mentor Jennifer Stefanotti spent some time in Liberia where she observed the talent and resilience of the Liberians. Black Entertainment Television founder Robert L. Johnson has been a vociferous proponent of Liberia’s marketplace and potential.

But being a proponent isn’t enough. It is necessary for the private sector to see Liberia beyond a spreadsheet. It is a view full of vibrant color and opportunity.

« Buying Locally: A Spreading Ethos? UNIFIL, Norway and Xanana.
On World Press Freedom Day: What about journalists in the developing world? (okay the day after, but hey I was busy) »