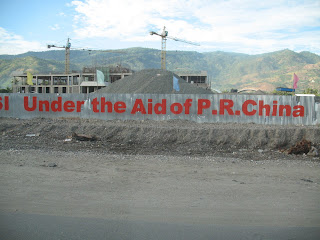 Many of the largest construction projects currently underway in Timor-Leste are being funded by the Chinese Government and implemented by Chinese contractors. The recently completed Ministry of Foreign Affairs, the soon to be completed new Presidential Palace and Chinese Embassy are three examples. However, there are indications that the Chinese Government will also be building the ne Ministry of Defence for the Government of Timor-Leste in addition to a residential complex for married officers at the F-FDTL Metinaro Training Facility.

These projects represent tens of millions of dollars of procurement activity, however it appears as though all of the materials and labour are procured in China. While a new building may be a good thing locally procured goods and services in the construction of said edifices acts as a major force multiplier in building private sector capacity and creating jobs. It seems as though a major opportunity is being lost.

Click here to cancel reply.
« An Opportunity Lost.
From Kabul to Dili »