Feature 1: Are you in the market for Rattan Furniture?

Look no further, or look as far away, as Suai on the south coast of Timor-Leste.

Marcelino Soares Pinto’s first experience in the furniture industry was in Viqueque in 1972, when as a student he found work with a state furniture production program. His life took a dramatic turn in 1975, when the Indonesian invasion led to him taking to the mountains with the FALINTIL resistance. In 1980, Snr. Marcelinos’ days with the armed resistance were brought to an end when a serious gunshot wound to the leg forced him down from the mountains. By the early 1990s he returned to the furniture industry.

On 4th November 1993, Snr Marcelino opened his rattan furniture business. By 1994 Snr Marcelino was employing 15 young men to help him meet demand. Later, he was able to purchase a generator and machining equipment which enabled him to produce the rattan strips more efficiently, and at the height of its development, Snr Marcelino’s factory was producing four furniture sets (each consisting of four chairs and a table) per day. All this came to an end with the militia violence of 1999, in the course of which Snr Marcelino’s buildings, equipment and materials were completely destroyed. 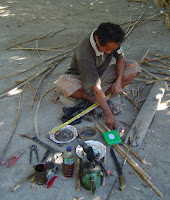 Snr. Marcelino pictured with the entire tool collection (with the exception of his home-made rattan-stripper) used to keep himself and five employees in business.

On 15th March 2001, Grupo Buka Moris was back in business, and Snr. Marcelino now employes 5 young men. Although Snr. Marcelino has developed some innovative tools out of available resources he has not yet been able to afford a new generator and machinery. In the seven years since reopening his business, most orders have been local and production has not yet exceeded one furniture set every four days. More recently, however, there have been some positive developments. The Peace Divident Trust Micro Matchmaking team based in Covalima have helped to attract orders for Grupo Buka Moris furniture from throughout Timor-Leste, and some items of furniture have even been taken to Australia as samples. He is also excited about an opportunity to pass on some of his skills to young people through the Dom Bosco training program. 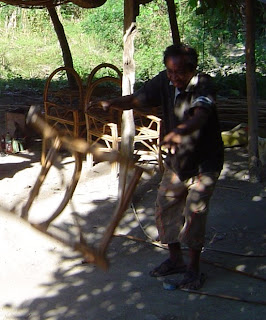 Three different models of furniture setting are available, each consisting of four chairs and a table. They are priced respectively at $35, $65 and $85.