In conjunction with the Dili International Trade Expo, Peace Dividend Trust has hosted and facilitated several types of activities geared towards cultivating the local economy of Timor-Leste. On August 16th 2009, Mrs. Ana C de Clouett, Director of ABTS Aust. Business Training & Support, delivered a presentation on human resource management. A total of 23 participants attended this event that was organized by PDT; the largest portion of the group came from women’s organizations, while others ranged from students to members of the National Union of Small Enterprises (Uniao Nacional de Pequenas Empresas).

Two days later, a presentation was given by Timor Global on the topics of meeting local demand and standardizing the quality and quantity of agricultural products. This presentation, led by Mr. Afonso de Oliveira, Agribusiness Program Manager, was attended by 38 participants, comprising of 15 women and 23 men. Mr. Oliveira gave detailed information on what types of agriculture products are in high demand and the transportation process from the sucos (villages) to Dili. He also provided documents and photographs about the goods that will be purchased. “I am very appreciative of PDT’s program which links consumers and suppliers. PDT has aided us in finding mungbeans, soy beans, corns, kidney beans, and peanuts, as well as assisted us in taking samples of soil”, said Mr. Oliveira. 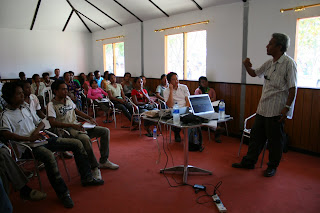 Later that day, PDT also presented a section of its own services, consisting of the Timor-Leste Procurement Database and blogs such as Buy and Build. Timor-Leste. It was delivered by Ilidio Ximenes da Costa, Brigida Soares and Gaspar Quintao. After the presentation, business owners visited the PDT booth in order to register with the database and ask that their products be promoted online. Within the first few days of the expo, PDT verification teams have already registered 8 businesses at the expo and another 8 businesses have asked to have their products promoted by putting them on sale at the PDT’s expo stand for passing visitors to buy. 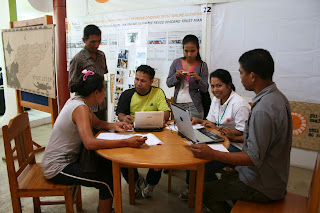 On the day of F-FDTL, August 20th 2009, Coronel Falur Rate Laek himself visited PDT’s booth and bought a few local business handicrafts. These goods were sold directly through the owner, who was promoting his wares at the PDT stand. Another notable figure to visit PDT was Mr. Gil Alves, Minister of Tourism and Commerece. 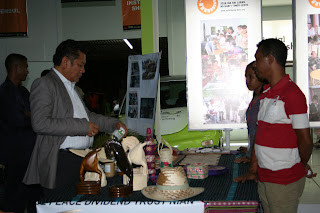 The Minister of Tourism, Commerce and Industry browses local wares.

PDT hopes to continue achieving favorable results throughout the duration of the exposition.